DRI Foundation Scholarship winner Gentry Gardner’s impressive list of accomplishments includes an extensive amount of volunteer work, the result of a decision he made at a very young age. “I got involved in scouting back in about first grade, and that was probably when I decided I was going to go all the way to Eagle Scout,” he says. “That was just a goal I set for myself, and I held myself to that going forward. I made a lot of friends along the way and had a lot of fun through the process. And I really think it was an important part in helping me shape my character.” 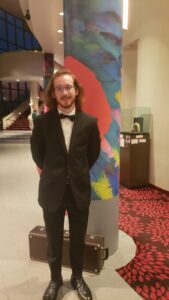 It wasn’t a family tradition he was following. “I was a scout as a child,” his father Bob Gardner, CBCP, said. “I think I left after a couple of years of being in the Scouts. But … I think from an early age, he loved scouting. He just didn’t want to quit. He just wanted to keep pursuing it.”

Thinking on the impact volunteerism has had on him, Gentry says, “It feels rewarding to get to help people. I’m always the type of person that doesn’t like forcing my help on people, but when they’re looking for aid with something, giving something to make their situation, their life, whatever they’re doing, run a little bit smoother, just always kind of warms my heart a little bit.”

As a sophomore at the University of Kansas, he’s currently a dual major in considerably different fields: Music and Physics. What made him want to pursue both? “I’ve got a passion and an interest in both of them. I would say music is maybe more of my passion, and physics and mathematics are maybe more my curiosity. But either way, both are things I deeply enjoy learning more about and exploring and studying and diving into.” 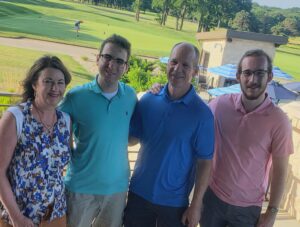 As a long-time CBCP, Bob knew when his son would be a candidate for the Foundation Scholarship for some time. He came to business continuity in the late 1980s with his perspective as a fire protection engineer, received his DRI certification in the 1990s, and has been involved in some capacity – from risk consulting to his current position in property insurance —  ever since. As a result, Gentry came to the scholarship application with a certain level of familiarity with resilience.

“I think he understands how it fits into the grand scheme of things. I think he understands the company that that I work for, and now that he’s doing an internship for the summer, how it all fits together. When we pulled the scholarship information and the questions that he had to address on supply chain, I showed him around the DRI website, and showed him the process of disaster recovery planning. And immediately he saw some of the parallels of how addressing supply chain really fits into the methodology of disaster recovery.”

Gentry agrees he’s gained a deeper understanding of his father’s job. “My dad’s been in his field for as long as I remember, and it’s just been this thing that he does. Until maybe the past year or so, where I’ve started understanding more of the professional and legal sides of his business. It was just ‘Dad going off to work’ up until then.”

When the call came to tell the family Gentry had received the scholarship, Bob was thrilled. “It was great to hear when Al [Berman] called. I’ve known of Al and I was familiar with his name, but when I saw his name pop up, it didn’t dawn me who he was. I was just thinking of another client or somebody like that. And so I answered the phone and then he explained why he was calling. And very quickly, I was very happy and just really, really proud of my son. He’s a great kid. I’m very proud of him, for sure.”

“I was really excited,” Gentry said. “When I wrote the essay and filled out the application I figured, well, this would be nice if I could get it, but I was counting on nothing because I don’t like counting my chickens before they hatch. So when I found out about it, I was thinking about being thankful to people like my high school English teachers for making me read and write as much as I did!”

Help us fulfill our mission to give back and move forward. Make a donation.
Loading Comments...